How I Met My Soul-Mate

What can I say, I love a good love story. I had one first (and only) date with my husband 13 years ago. I met my husband, Eddie, a few weeks before our first date at work. I think we were destined to meet. It sounds silly but the first time I saw him...I saw my life with him. 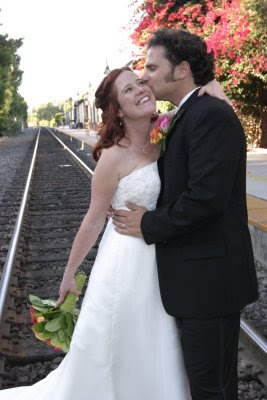 It was Eddie's first day and I immediately noticed him and it was not just because he was "the new guy." Lucky for me he noticed me too.

It was tricky though, I had an ex-boyfriend who had started calling and asking me out again. When I dated Mr. X, I was pretty smitten with him and really did not know how to handle him popping back up in my life after I was OVER him. He had crushed my heart before but now he was telling me that breaking up was a mistake and that he wanted me back.

I was juggling thoughts of seeing Mr. X again and the idea of maybe something happening with the cute "new guy." It was weird because I had a magnetic draw to Eddie and he was a total stranger. I was not sure how to process my feelings for a complete stranger. It is such an odd feeling...a draw that pulls you.

Over the next few days, Eddie tried many attempts at flirting with me, but for some reason I was not noticing his efforts. All the while Mr. X was leaving little notes at my door and calling.

Finally, Eddie made his bold move. I was wearing a red flower-printed dress and red Dr. Scholl's shoes...the wood kind that make tons of clack noises. In his last-ditch effort to get my attention, he approached me and asked if my shoes were comfy. He said, "I like those shoes. Are the comfortable? I was thinking about getting a pair." I was in shock and replied in a semi-snarky tone, "They are girls shoes." He stared at me and said nothing.

Then he got a huge smile on his face and he tried to recover. Then he blurted out, "Do you want to go out to dinner with me?" I froze. All week I had been thinking about him and the possibility of seeing him outside of work, and when he asks, I freeze up. The tension was cut short as a meeting was called.

All I could think was that I blew it. During the meeting, I crafted a paper airplane that had my phone number on it and I flew it over to him. He knew we were on and the date was set for Saturday. When I got home that night I checked my answering machine and I had a message from Mr. X asking me out for the same night. I politely declined and informed him that he was a day late and a dollar short.

Saturday, I was a ball of nerves. I got a new dress to wear and spent hours getting ready...I think back now and it all seems silly. Eddie picked me up with a rose in hand and we went to a jazz dinner club, where we dined on delicious food and listened to music. After dinner we headed over to The Lodge for a cocktail.

We stood under the carved red light and he leaned in and kissed me. It was as if no one else was even in the club. The chatting voices became silent and the faces were as still as a painting. It was just us....and Mr. X! Yes, Mr. X was sitting in the booth next to us, but we were so caught up with each other that I never noticed him.

When Eddie walked me to my door he asked me for a second date for the following weekend and I was elated saying yes. I just knew he was the one. I just knew. Wednesday morning I became very sick and had to miss work.

I was green, I was sick, I was a mess. By Thursday it was worse and I was beginning to feel like I would not be well by Saturday for our date. I called Eddie and told him about how sick I was and that I worried I would not be better by our date. He asked me what kind of movies I like...ya know, romance, thriller or comedy? He asked if I had food. He asked if I needed medicine. And then he told me he wanted to bring me some soup.

I almost passed out. I was green and looking like a monster. This was no way for him to see me...we had only been on one date! About an hour later Eddie arrived with a bag of movies (every genre was covered), a bag of groceries and homemade soup. I couldn't move from the sofa, so he brought me a tray with soup and we started watching movies.

For the next three days, he kept me hydrated and fed. We played cards and told each other our life stories. He slept in the chair, keeping watch over me while I slept on the sofa. After that he never left...we moved in together the week of November 6th, 1999, after one date. People thought we were nuts...but we knew better. We were soul mates that were destined to find each other.

Posted by Cathie Filian at 9:00 AM