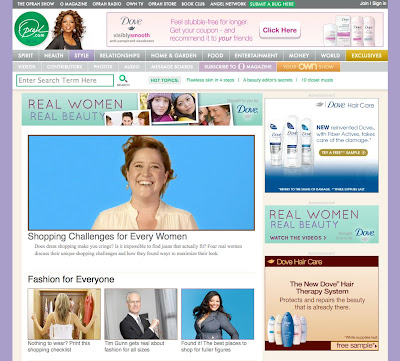 My Dove Beauty video for Oprah is live! You can check it out here! I had a blast working with them! It was such an honor to be included in the series with so many awesome women.

The video went live yesterday and when I woke up this morning my email was flooded with questions. I thought I would address some of them here.

The most asked questions and comments were......

Did you really cry when you found jeans that fit?

Yes - I was in an Abercrombie & Fitch and finally found a pair that fit after going to every shop in the mall. They were my last hope and they had this awesome pair with pink pipped pockets. I was so happy that I got tears....so silly.

I did not know you were a Costume Designer! How did you get into costume design?

Yep! I did costumes for 10 years. I worked in the costume department on 24 films and TV shows before becoming a producer/writer/host. I was also a personal dresser for Jennifer Love Hewitt. I got to dress some of Hollywood's leading ladies and gents. That means, I got to see most of them naked or in their undies. I have lots of stories, but a good costumer never tells.....

I got into costumes while living in Texas. My first film was with Dwight Yoakam (he played a rodeo clown) - it was really low budget and wacky. I got the job after researching with the Film and Television Commission of Texas. I called, applied and within 3 days was officially working on my first film. My next film was Bottle Rocket with Wes Anderson. He was a delight and I was lucky enough to continue to work with him in the future.

You can learn more about my film credits at my IMDB page!

How do you hem pants?

I have several techniques for hemming! I am thinking that a full blog post on hemming is in order! Check back soon.

I had no idea you were so short! You don't look short on TV.

5' 2" to be precise. I wear big wedgie shoes behind the craft table when we film. Steve is over 6 feet tall so we have to balance each other out. He wears socks and I were huge high heels.
Posted by Cathie Filian at 2:12 PM