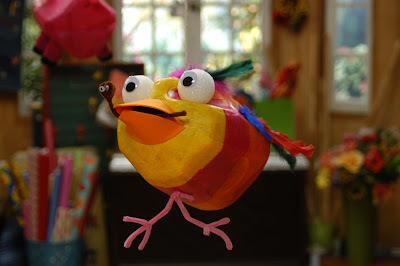 Kids can take a swing at making your their own piñata. These colorful creations are a hit every time and are made with recycled milk jugs.

Steps:
1. Make sure the milk container is clean and dry before starting. Cut a U-shaped flap in the bottom of the milk jug with a craft knife. (Parents help with the knife) You will be hanging the jug from the handle, so cut the flap so that the opening will point downward when the piñata is hung up.

2. Fill the jug with candy and tape the flap closed with a small piece of masking tape. This is just to hold the flap down as you add tissue paper, so you only need to use a little bit of tape.

3. Cut your tissue paper into small (roughly 2”) squares and paste them to the jug with Mod Podge. Put as many or as few layers of tissue paper as you want, but be sure to cover the opening on the bottom with two to three layers – this will hold the flap down just enough so that the piñata will be able to burst open when hit. Allow the Mod Podge to dry thoroughly.

6. To make your piñata into a bird, cut out two triangular pieces of craft foam and use hot glue to attach them around the spout of the jug, forming a beak.

8. Place the worm in the bird’s beak, using hot glue to secure if necessary, and attach the legs to the underside of the jug with hot glue. You can really use your imagination when embellishing your piñata, but remember to use soft, light items that won’t hurt anyone if they fall off when playing with the finished piñata!
Posted by Cathie Filian at 10:57 AM