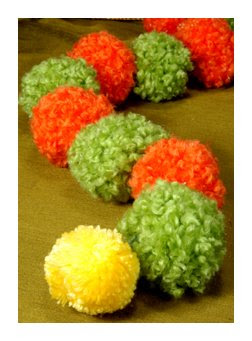 Make it: Pom Pom Scarf
from the Citrus in the City episode of Creative Juice

1. Following loom instructions, unhinge one of the arms and begin wrapping with yarn. Wrap evenly until the entire arm is covered with yarn. Next, snap the arm into the center of the loom and cut the end of the yarn.

2. Repeat the wrapping process for the second arm, fold arm in and snap in place.

3. With small scissors, insert one scissor blade into the groove of the loom, between the loops of yarn, and carefully snip along the tops of the loops.

4. Wrap a small piece of yarn around the groove on the loom and tie in a single knot.

5. Remove the pompon from the loom and pull the tied string tight. Tie a double knot.

6. If desired, use scissors to trim the pompon, giving it a more uniform appearance, or leave it as is with a "wilder" look.

7. To string the scarf, thread a yarn needle with a long length of yarn (at least a foot longer than the finished scarf). Thread the first pompon by pushing the needle through the center area where the pompon is tied off. Tie off the strand of yarn being used to thread the scarf.

8. Continue threading pompons, tying a knot after each pompon is added until scarf is the desired length. Tie off the end of the yarn and snip the end.
Posted by Cathie Filian at 7:53 AM