I got this email and thought I would share.

The wife and I watch your show all the time! I just read on the internet, that you live in Clara Bow's old house! Is that the house we see on your show? I ask because I'm a silent film nut, and Clara is one of my Fave Stars. If only that house could talk, eh?

That house was amazing! I say "was" because we have since moved due to the building being sold to a new developer. SO Sad!

In the late 40's the house was chopped up into large luxury apartments. They even had butlers quarters and separate entrances for cooks and maids. Steve and I both shared a floor, (kind of like a duplex) our apartments were originally the ballroom and if you look close you can see the large arches.

We filmed season 1 and 2 in the house. The rest of the seasons are filmed on a set that looks like a house. The Clara/Ivar house has the smaller kitchen with white and orange striped walls. And the set has the kitchen with the zebra wood cabinets. We also filmed the Holiday Special in the Clara Bow house. In the film noir episode you can see the front of the building when we are at the mail box.

The walls did "talk" - I never paid much attention to ghosts stories until I lived on Ivar. Lets just say the house had a personality that was full of life. During filming the spirits were a flutter! I think they were happy to have something filming in the house. We never got spooked it was just funny stuff that would happen. One time, I was so hot from the lights that I thought I was going to pass out. I jokingly said "Clara! please open the door and let some air in." Sure enough the balcony doors opened and the whole crew flipped out.

I am glad you and your wife are enjoying Creative Juice! We have so much fun making the show. It truly is a labor of love. 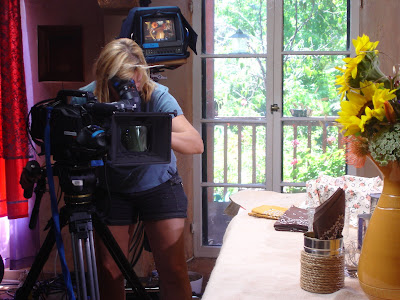 Here are the doors the mysteriously opened.
Posted by Cathie Filian at 10:02 AM